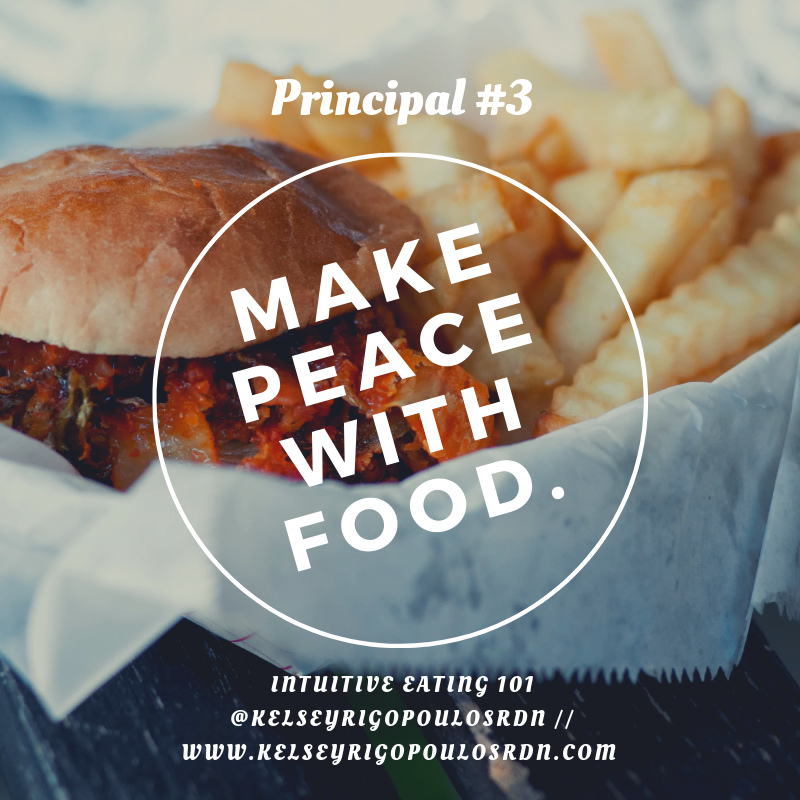 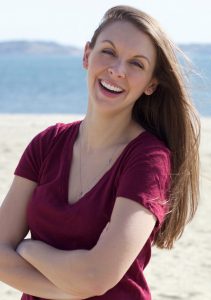 How many BBQ’s have you attended this summer at which you felt totally at peace with food and fully at ease with what you ate? Picture it: all of those juicy burgers smothered in your favorite condiments, every variety of salad possible – potato, Caesar, macaroni, orzo, Greek tortellini – and of course a plethora of cookies, cakes, and popsicles, [maybe even a few adult beverages]. If you’re struggling to climb out of your diet ditch, rather than feeling excited about having fun in the sun, you may have felt some familiar anxiety come through.

What’s the best choice to fit my points/calories?

Are potatoes even good for you?

If you resonate with this bombardment of food reflections, I want you to read this very carefully: you can make peace with food. For many people, one of the more difficult parts of the Intuitive Eating journey is the concept of giving yourself unconditional permission to eat all foods. This means no more food moralization, no more intentional restriction of food [unless of course you’re allergic or it’s poisoned], and hopefully, no more guilt.

The idea of dieting most frequently comes along with some form of deprivation – physical and/or mental. Some diets are incredibly forth coming about physically restricting certain foods [hey, Pale/Keto/Whole Thirty/Ideal Protein and any food replacement shake, I’m looking at you]. Others inherently use fear mongering by placing morality to foods in ways that encourage restriction [yo, Weight Watchers, you’re not fooling me]. And some, maybe the most confusing of them all, appear to “allow” all foods, but support deprivation by means of suggested “portion sizes” [beware of rigid label reading]! As always, I am never coming from a place of judgment on those using, or having used, these diets, nor those who publicly proclaim their diet success or sell certain products. I am, however, hard core judging and hating on the culture that has created this environment that thrives on encouraging people to deprive themselves, lessen, become smaller, take up less space, or be somehow “better.”

At the end of the day, giving yourself unconditional permission to eat all foods means coming from a place where you are not deprived OF ANYTHING. Now, please realize, this is a very privileged principal as some people don’t have the access or ability to do this. If you logistically do have this privilege, it can look like having two hot dogs instead of one at that BBQ, or grabbing ice cream [the real stuff made with cream and sugar] on a random Tuesday night, or keeping your favorite cookies in the pantry [yes, all the time]. Being able to make peace with food in this way is not only really fun and fulfilling in so many ways, but can help reduce the nasty, un-fun biological and psychological effects of deprivation.

As previously discussed in my blog Your Unreliable Friend, the human body has a very particular biological response to what it perceives as restricted energy. Hormones do their thing to send hunger signals like wild, whether they be in the form of a growling belly or preoccupied mind. Oh, and those cravings for good ‘ole sweet and salty? Turns out our brains love carbs and fat so much they’ve learned to send very special messages to influence us in changing our minds [“Just eat the damn pasta” – your hypothalamus]. While this going on in response to our dieting habits, we’re also psychologically effecting ourselves. In what Intuitive Eating calls Rebound Eating (1) food deprivation of any kind most often leads to wanting more of that food that’s now seen as “extra special.” This is also known as the Forbidden Fruit Theory [something I also learned in my earliest years of attending a Catholic church]. Although there are multiple ways to consider Rebound Eating, most people I’ve met resonate closest with The Last Supper effect (1) [who knew I had more religious references?].

Even the perception of potential restriction can trigger overeating and lead to very much attached, negative feelings. Not only is that forbidden food now thought of as something super special, but after having avoided it like the plague for some time, you’re much more likely to over-do it the next time you choose to indulge. I mean, what if you never ever get to have it again? *Sarcasm, but also sincerely legit* A common emotional response following a Last Supper episode is unfortunately, shame, guilt, and frustration. How dare I eat that awful food! And not just X portion, but Y portion! I must inherently be a failure for ever having given into such a terrible thing, therefore, diet Z starts tomorrow.

See what I mean? Now imagine this – all foods are morally equal. There is nothing “healthy” or “unhealthy,” good or bad. Food is just food, in all of its delicious glory. What we know is that having a variety of foods around from day to day helps create this normalcy. Expectancy. We are much less likely to have Rebound Eating urges if there is no pull back to begin with. And that whole feeling guilty thing? There’s no need, especially if you truly see all eating choices as equal and acceptable. Okay, I know what you’re thinking. “But I’d most certainly eat donuts for the rest of my life and gain a million pounds!”

First, literally no one can gain a million pounds – let’s be real.

Second, I have to call out the fat phobia in such a statement. Think about it.

And last, Making Peace with Food is just one principal of IE. In exploring things like hunger, fullness, satisfaction, and eating with emotion you’ll have so many skills to use in order to decide when to call it quits. Oh, AND you’d probably just get really sick before eating that many donuts anyways. So my first suggestion? Start using the observations you’ve made around diet culture and apply it to your food relationship. Can you simply be curious about how you think about foods, without placing judgment? And can you choose to be kind to yourself when/if you do eat past fullness?

Let’s start here: what are some of your “forbidden” foods? If you’re feeling bold, keep a list [who doesn’t love something you can draw a line through?] Try keeping such “treats,” maybe one at a time, around the house. And when you’re craving said treat? Eat it! Test it out. Want support with this? Feel free to reach out!

This is how we feel about my return to work Monday